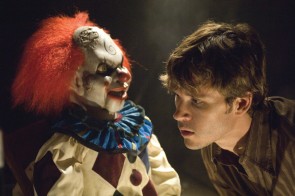 One night, Jamie and his wife Lisa receive an anonymous gift: a dummy named Billy appears at their door in a suitcase with no sender. Hours later Lisa is mutilated and murdered. Inside the suitcase the dummy was delivered in is an inscription indicating that it comes from Jamie's home town, Raven's Fair and that it is the property of a famous and now-deceased ventriloquist called Mary Shaw, whose last request was to be buried with all her dummies. Now one of them's out. After the first three installations of the Saw saga, James Wan directs and Leigh Whannell writes this tale about devil dolls.