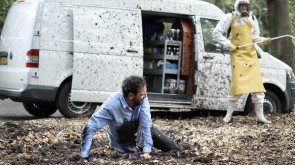 Okay, Top Gear and Fast & Furious buffs, it's highly unlikely that a Volvo CXC90, no matter how much traction it has in its 4 x 4 or the extent of its SUV Premium, can make its wheels spin as fast as the victims of the fumigator, well-educated but with a murderous streak, when they get stuck in the mud. Okay, so let's forget the trivialities, because this nth variation of the urban legend brought to us by Duel (1971) is well worthwhile with that perverse tone of a film from a supposedly "frugal" country, that scent of the Netherlands where everything seems fine at home until you realise that the family is actually totally dysfunctional... They say its release went badly in Holland... let's welcome it here with honours.