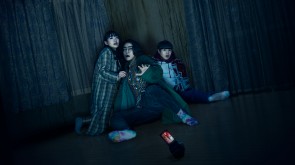 Of course it's him, Hideo Nakata, the grand master of horror: Ringu (1998), Ringu 2 (1999). Him, who went into Aokigahara, the suicide forest. Of course it's a film based on true facts. As real as the experience of the screenwriter and comedian Tanishi Matsubara, who lived in houses that had been the setting of murders, abuses, rapes, suicides, multiple accidents and hangings. He lived and filmed the ghostly presences or absences that had been left there high and dry, demanding revenge, justice, or simply someone to show them the Light. Of course it's probably a good trick if you don't want to share a flat with just anyone. Better with ghosts. And the rent, cheap as chips. Of course it's an evil, sardonic, dark film that frightens you at times. And how!