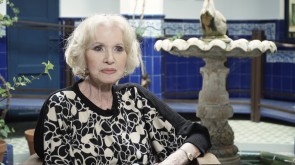 In 1954, with an already promising track record on stage, Helga Liné debuted in Spain's theatre scene. From the 60s and on the German actress lived a blooming career on cinema. Peplum, thriller, comedy, spaghetti western, eurospy, adventure... no genre would avoid her, and due to her contribution to fantastique she became "la dama del fantaterror".