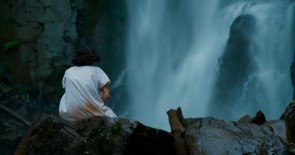 On 4 October 2020 Laura Casabé released her third feature in the San Isidro drive-in cinema at 1750 Sebastián Elcano street, Buenos Aires province. It doesn't seem like a bad place to release a film that opens, like the tale of Clarín, with a mother standing at the foot of a waterfall begging the mighty Iguazu to bring her dead baby back to life. Seconds later, the stiff little body breathes again, only to let out a monstrous screech. Iguazu is our Mari. Or the Xtabay of Selva trágica (2020). A terrifying goddess who grants favours, cert, but at a price. We're on an estate in the Misiones province. We're in the 19th century. These are not good times if you're a woman, if you're an Indian. Times of cholera, devoid of love, made from classic cinema of the good kind.