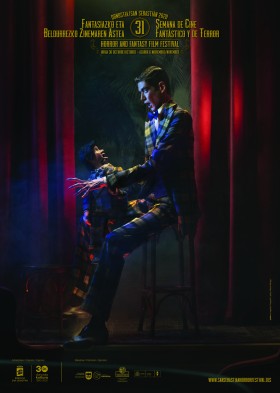 Javier Botet, an indispensable presence in fantasy movies worldwide in recent years, is the central character of the poster for the 31st San Sebastian Horror and Fantasy Film Festival, to run from October 30 to November 6.

Botet has been turned into a ventriloquist for the occasion, accompanied on stage by Nino the doll, in a poster paying tribute to the dolls of both sexes to have appeared in horror films throughout its history.

The dolls therefore become the central theme of the 2020 Festival, which will screen a number of classics from the genre in which they have appeared. On the other hand, they will also play the central part in the exhibition Fantasy Beings, running at the Okendo Cultural Centre from September 25 to November 9 with a display of puppets from Tolosa's Topic Museum.

The photograph was taken in Madrid's Picnic bar by Alberto Morago, who also directed the making of. Yet again this year, the poster design is the work of the Ytantos studio.

Having made several short films, in 2013 he wrote and directed an episode of the anthology film Al final todos mueren, and in 2019 co-wrote and starred in Amigo (2019), screened at the Festival last year.

Photograph and editing of the making of: Alberto Morago