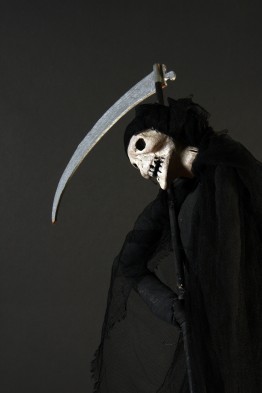 Fantasy Beings is an exhibition designed ad hoc by the Topic Museum in Tolosa for San Sebastian Horror and Fantasy Film Festival. This show, opening on September 25 at the Okendo Cultural Centre and running until November 9, will feature 80 puppets, half of which have never been exhibited before and emerge for the first time from the Topic storerooms eager to "make their debut in society" as museum pieces.

Topic is Tolosa's International Puppet Centre. Opened in November 2009, it is a singular, attractive and interesting project devoted to the imagination, innovation and originality. It is the only one of its kind in all Europe completely dedicated to the art of puppetry.

"We've turned all the storerooms upside-down to find the perfect and appropriate pieces, something which is an exciting challenge and task, because you always come across the odd puppet that had been forgotten or realise that at last you have the possibility to reveal those which were not quite so aesthetically fortunate when created and, perhaps for this reason, had been relegated to a less prominent place", said Topic's head of museology, María San Sebastián.

The show is exhibited by character type or archetype. "While there are many 'scary' or terrifying puppet works for adults, the audience they are intended for is quite a bit smaller than that of the Topic in general", María continues.

We want this exhibition to be an exhibition for all publics. Besides, the beings that may be considered frightening by some adults or cultures, are not so for boys and girls or for people with other origins.