The exhibition "Sarima: A magical world" is open at the Central Library 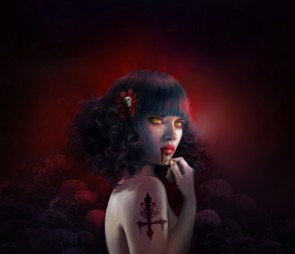 The exhibition Euskadi Fantastikoa XVI – Sarima: A magical world will be open between October 24th and November 14th at the Central Library (Alderdi Eder).

Sarima is the pseudonym as illustrator of Marisa López, the result of reversing the order of the syllables making up her name. Resident and native of Bilbao, she is a digital illustrator, graphic designer and teacher. She has produced myriad fantasy beings and worlds: elves, witches, Basque mythological beings, fairies, fauns, sorcerers, female warriors... magical creatures of all kinds born from her imagination to make our dreams even richer. We will visit her illustrations for Ilunabar: Magic Fables, her delightful covers for the books by writer Pedro Urvi, and many other creations produced for different publications.

Sarima is mainly dedicated to editorial illustration as a creator of covers for both publishing houses and independent writers. Her illustration The Counselor was selected by director George Lucas to head the digital illustration section at his Chicago museum's web. In 2011 she brought out her first book as an author and illustrator, Ilunabar: Magic Fables, with the publishing house Dibbuks. She has participated as a character designer and final artist in the MMORPG Black Age Online and in the game Battle for Gea by Iron Belt studios. In 2009 she received the Mallorca Fantástica Illustration Prize. Several of her illustrations have been selected for Exotique and Expose, annual publications by Ballistic Publishing, which feature the best work by digital artists from all over the world. She has been the art director of the fantasy magazine Imaginarios.