BEYOND THE INFINITE TWO MINUTES (2020) 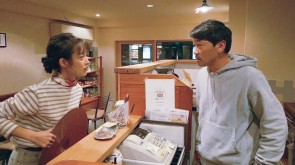 Hailed at all festivals of the fantastic, terror, sci-fi, anime, manga and/ or exploitation as a "one-take time travel Sci-fi comedy" and celebrated on posters announcing its imminent release with the sentence pronounced by Shinichiro Ueda, our beloved colleague from One Cut of the Dead (2017) as: "A masterpiece of film-making packed with joy", the movie by Junta Yamaguchi, who cast light on that Taxi Driver Gion Taro (2014) based on a radionovela, works wonders with the idea that your TV set will soon allow you to travel into the future... by two minutes. And in the bar-cafe-hovel you frequent... It doesn't sound like much time, does it? Even so, screenwriter Makoto Ueda still manages to ask a couple of philosophical questions.