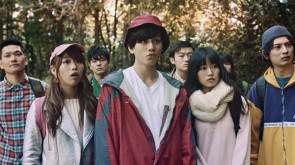 Orson Welles directed Citizen Kane (1941) at the age of 25. Hugo Sakamoto has filmed Yellow Dragon's Village at 24 and all of the fantastic festivals of fantastic cinema in the planet have bowed to his camera, from Central Asia to Austin. Sardonic and biting, this moviette featuring youngsters on a camping trip who stop where they shouldn't stop, and even worse, decide to spend a couple of nights there (oops, cannibals!), is a vulgar and delightfully scrappy combination of comedy, martial arts fest, found footage, mobile phone recordings and abominable crimes kicking off with a great scene during a picnic... Budget not even at shoestring level, zero depth in the character stakes... but oh how tasty and naughty it is!