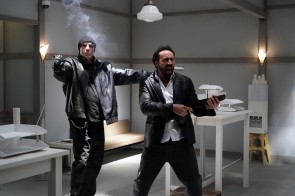 In the diabolical Daily Dead website they called it a "total gonzo cinematic experience". Makes sense if it comes from the producers of Mandy (2018) and Colour Out of Space (2019). It wasn't about to be anything like a n(f)ormal western, thriller, wuxia, sci-fi if it was helmed by that freakish poet-cum-filmmaker Sion Sono, winner of the Caligari award and of the Fipresci at Berlin in 2009 for Love Exposure. How could it be anything other than a splendid mixture of Escape from L. A. (1996), Mad Max (1976) and anything else starring HIM: Cage!? The media description is: "In the treacherous frontier city of Samurai Town, a ruthless bank robber is sprung from jail by a wealthy warlord whose adopted granddaughter has gone missing."