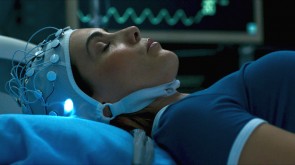 They're going to put me in mummy's mind. She's a serial killer and I participated in the early tests of some kind of experimental technology. It think mummy (or her neurons) is in a simulator. I am Carly Pope and in 2016 I worked with Virginia Madsen in Lost Boy, Tara Miele's film. The one we have here is a (very) low budget Canadian production by the director of District 9 (2009) and Elysium (2013) where demons will be unleashed left and right. Who said there's nothing like a mother's love? Maybe they were right... What some folk say is that this is a sort of The Exorcist (1973) from the computer technology era. And it's also true that Neill has used methods not yet patented for the volumetric capture of the characters.