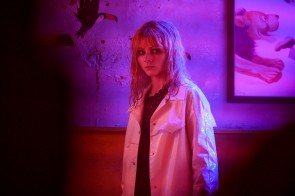 It screened in Venice. Alongside The Power of the Dog (2021). Out of competition. This British production slathered with US funding. About a girl who dreams of becoming a fashion designer (like so many other folk), of living in London (like almost everybody) and of having been born in the 60s (like some people...). She bags herself a tiny room in Londonium, goes to bed, and wakens... in the Soho of the 60s! In fact, a cinema near the Café de Paris is running Terence Young's Thunderball (1966). The neon lights flicker, girls dress and wear their hair as Divine would go on to do, somebody kills somebody... and Eloise sees them. Eloise returns to the present. Eloise reports it. In the cast: Terence Stamp. And Diana Rigg. Directed by the author of the documentary on the Sparks Brothers.