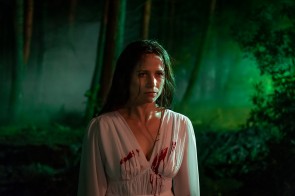 "Elegant and disturbing". Two adjectives fondly loved by horror junkies. Two superimposed adjectives in the trailer of this fascinating directorial debut from a Welsh girl called Prano Bailey-Bond who penetrated the midnight of Sundance and Berlin with this, her first movie, after being named by Variety as one of those promises of which no decent freak worth their salt should lose sight. In fact, it's her and nobody else who takes to the screen the short stories of Mariana Enriquez's Faustian book Things We Lost in the Fire. A British censor of horror movies. A missing sister... "People think I make the horror", she's told by a moviemaker, "but the horror is already there inside us".