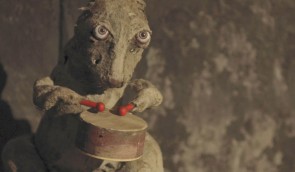 You can smell it. In this movie, landmark of the Halloween FrightFest 2020, you can smell the mildew coating the walls of the house where Isaac has ended up. He doesn't have a very promising future, so he's accepted the job of servant-guardian-protector, on a virtually uninhabited island, for a psychologically disturbed girl so afraid of men that she obliges Isaac to wear a leather harness attached to a chain to restrict his movements. All in a film where everything happens in almost total silence, with surrealist hues and an exquisitely irrational narrative (according to Sight & Sound). The director, Damian McCarthy, a regular at the Festival, admires Guillermo del Toro and always wanted to film something that looked like "an old ghost story".