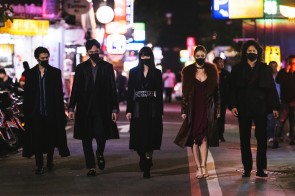 Yep, they're beautiful. Yep, they're dead. But they're also rich. Dirty rich. According to the Pandora Papers and the Rotterdam Festival accounts, the Vanderbilts have a fortune estimated to stand in the region of 25 billion dollars. The Lo Family is poorer: their tax haven savings don't seem to be a penny over 1.5 billion $. The Rublovs raise the stakes: 23 billions; with ten more than the Tsais, who have some 13. We don't know the sum of the Wo dynasty finances. A film from The Netherlands with style. Class. Charme. Directed by the author of Beat (2004) and Full Contract (2015). Good advice for the rest of your life: if you're so beautiful and so rich that you're sick and tired of yourself and bored stiff with what the French call l'ennui, why not die and turn yourself into a vampire? Great stuff.