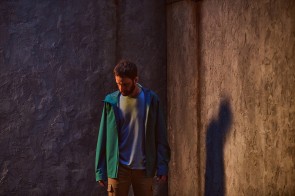 Paula. Ortiz. The author of La novia (2015) turns to Horror. Big style. She takes the helm, in the reboot of "Historias para no dormir" backed too by Isla, ViacomCBS and RTVE, of one of the most iconic episodes, the one in which Narciso Ibáñez Menta fell into a hole of tar mixed with sand and gravel, slipping down further, further and further as though, instead of a city avenue, he was in the desert and the sand was quicksand... Now it's a rider who falls (a delivery boy with the face of Dani Rovira). And, as usual, the creature is invisible to our eyes. Even in the fu..... asphalt. The parents of the episode's director didn't let her watch "Historias para no dormir". But her mother would tell her about them. And that's much more scary, right?