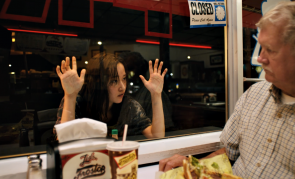 Ana Lily Amirpour likes girls who walk home alone at night. Riding a skateboard, wearing the burka like a vampire's cape. Girls who can get by just fine among a handful of nasty cannibals: The Bad Batch (2016). Girls who have, quoting the press kit, "unusual and dangerous abilities". Those who escape "from the madhouse" where they've spent their "whole lives" and try (in their own way) to "become part of the world". We like Ana Lily Amirpour, of course. Because she directed in "The Twilight Zone" (2019-2020). Because she's going to work with Guillermo del Toro and Panos Cosmatos. Because she was in Venice and opened Sitges. Because her flick is set in the New Orleans of Interview with the Vampire (1994), of Lynch, Muguruza, jazz and bourbon.