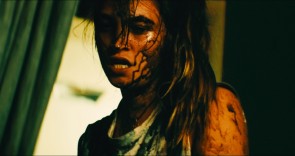 According to the International Movie Data Base, what starts out here as a typical girls' outing with the intention of having a hell of a weekend in the Mojave desert, gradually morphs into a tale of terror, death and alien invasions. We could expect no less from our much-loved Sam Walker, who we know and well and to whom we gave an award at the Festival in 2001. Sam is the author of Duck Children, that short where an armed man bursts into a school celebration and sets about picking them off like sitting ducks... In the cast of The Seed we find girls who have worked in the series "Vikings" (2013-2020) or in Becoming Jane (2007) and who have lent their voices to creatures in a number of video games. The soundtrack? By a very electronic Colombian chick who lives in Berlin.