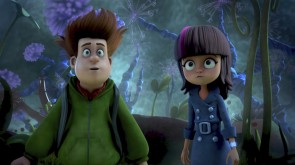 Danny Dawkins is offered a scholarship to study at Cranston Academy, a prestigious school for genius kids. There he meets his rival and roommate, Liz Fizzerton. In the quest to prove his intelligence, Danny sets about repairing an old particle reactor, opening a portal to another world known as the 5th Dimension, home to a slew of monsters and hair-raising beings. Helped by a half-moth, half-man aptly named Mothman, Danny and Liz must overcome the creatures to close the portal and save the school from imminent annihilation.