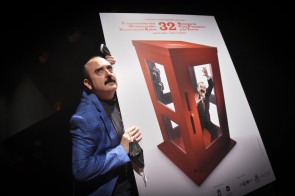 Actor Carlos Areces features this year on the official poster for the 32nd San Sebastian Horror and Fantasy Film Festival, to run from October 29-November 5. The poster pays tribute to the legendary medium-length movie La cabina written by José Luis Garci and directed by the filmmaker from Lasarte, Antonio Mercero, in 1972.

Carlos Areces puts himself in the shoes of José Luis López Vázquez, star of the movie, whose image trapped in the telephone box is unquestionably one of the most iconic and remembered in the history of Spanish fantasy cinema.

La cabina, produced by TVE, aired for the first time on 13th December 1972, causing great impact on the audience of the day. It became an enormous international hit, being shown on televisions across the world and winning countless awards.

The photograph was taken by Alberto Morago, who is also responsible for the making of.

Following the trend of recent years, the poster is designed by the Ytantos studio.

Actor, musician and illustrator, in recent years Carlos Areces has become a hugely popular Spanish film and TV actor, and one of the most versatile. Having starred in the cult TVE show "La hora chanante" (2002-2006), he launched his movie career with films including Spanish Movie (Javier Ruiz Caldera, 2009) and The Last Circus (Álex de la Iglesia, 2010).

He has published his drawings and stories in publications such as El Jueves and continues his musical career with Aníbal Gómez in the duo Ojete Calor.

Photograph and editing of the making of: Alberto Morago