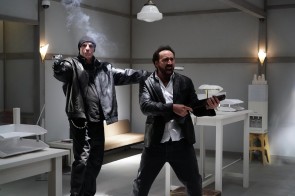 Here you'll find some of the feature films that will participate this year at the Official Selection of the 32nd Horror & Fantasy Film Festival, that will take place between October 29 and November 5.

Five stories where an app will open the doors to fantasy and horror. A young woman in the hands of a group of degenerates belonging to a sinister network of online broadcasts. A voyeur who will discover that his neighbours are hiding dark secrets that he wished he had never uncovered. A woman on a mysterious dating app. A group of friends on the way to a music festival that fall into the hands of a sinister rural cult. A child used by his father to arrange dates online who discovers a huge power to defend himself.

In real life, Suzu is a complex teenager trapped in the small mountain village where she lives with her father. However, in the virtual world of U, Suzu becomes Belle, a musical icon with more than five billion followers. A difficult double life to manage for timid Suzu, which will take an unexpected turn when Belle meets the Beast, a creature as fascinating as he is terrifying. This is the latest release by Japanese animator Mamoru Hosoda, director of movies including Wolf Children (2012) and Mirai (2018).

This is the debut movie for the director and practically the whole team and was shot with an iPhone. Kato is the owner of a cafeteria, lives in a small apartment located over it, and begins to think that her life has ground to a halt. Until one day when she gets home and sees herself on her computer screen in the café, talking from the future, specifically two minutes into the future. Kato and her friends are caught up in a two-minute temporary loop in this head-spinning movie that was described by someone as a cross between One Cut of the Dead (2017) and Tenet (2020).

This is the first feature film of Irish director Damian Mc Carthy, a regular at this Festival, where several of his short films have been screened, such as He Dies at the End (2010), Never Ever Open It (2011) and How Olin Lost His Eye (2013). Just released from hospital suffering from memory issues, Isaac receives a job offer from his landlord, who needs someone to care for his niece for a few days on the lonely island where he lives. There is only one condition: he has to wear a chain around his neck to stop him entering certain rooms in the house. Once the uncle departs, the cat and mouse play begins between the young girl and her caregiver.

A young American couple who are fond of urbex (urban exploration) is taking a trip around France. They decide to go to visit and record a house that is said to be cursed and that now rests at the bottom of an artificial lake. Once there they end up trapped under the water in a mansion that hides a terrible dark past. Bustillo and Maury, whose previous horror classics includes À l'intérieur (2007), Leatherface (2017), Kandisha (2020), dive right in to tell their new story.

This is a story about shamanism in the Thai region of Isan. A team makes a documentary about a local shaman, a person who moves between the world of the living and the world of spirits. His niece and possible successor begins to behave in a strange way, as if he had been possessed by an evil entity. One of the most terrifying films of the year (even shown with the lights on at certain theatres in Korea), directed by Banjong Pisanthanakun, who opened the Thai film terror festivals with Shutter (2004), and produced by the Korean director Na Hong-jin (The Wailing, 2016).

When Bernice disappears without a trace from a post-apocalyptic moorland, her adoptive grandfather, a warlord known as "the Governor," breaks a bank robber out of jail, straps him into a leather suit that will self-destruct and gives him five days to find her or suffer the explosive consequences. The bandit also finds his own path to redemption during this adventure. Sion Sono, of Love Exposure (2008), Tag (2015), Tokyo Vampire Hotel (2017), and Nicolas Cage are in an uncertain future where anything could happen.

A young couple tries to survive in the midst of the chaos caused by the new mutation of a pandemic that is raging through the country. Those infected act in the cruellest way imaginable and have swiped the streets with violence, depravity and death. Murders, torture, rapes, mutilations and all kinds of brutality are daily occurrences in the city. Civilization and order are long gone. Now all that remains is sadness.

Three young friends set out to stay in a luxury villa in the Mojave Desert to spend a few days chilling out in the wilderness. One of them is an influencer who tries to film everything going on for her social media, such as a meteor shower one night. But was it really a meteorite? First-time feature film by the British Sam Walker, a regular at this Festival since the early 2000s whose shorts include the by-now classic Duck Children (2001).

Four young people decide to go to camping during a night of partying city the following day. The following morning, they meet four other friends and set off, but then get a puncture and have to go the rest of the way on foot. They meet a friendly local who offers to help and takes them to their village, where their friendly façade drops very quickly. A surprising, fun and uninhibited cocktail of genres, this is the first movie of young filmmaker Hugo Sakamoto.

Historias para no dormir is the reboot of the emblematic Spanish series by Chicho Ibáñez Serrador. Fifty years on from its original release, Rodrigo Cortés, Rodrigo Sorogoyen, Paco Plaza and Paula Ortiz have directed four episodes of this new anthology, which are updated versions of the stories from the original series. Freddy (Paco Plaza) and El asfalto (Paula Ortiz) will both be shown during the Festival.

André is a lousy actor about to lose his job playing a ventriloquist. On the advice of Chicho Ibáñez Serrador, he starts working with a mysterious doll who helps him get rid of his insecurities. This marks the start of macabre events that leads this movie to tipping point. Paco Plaza of [REC] (2007), Verónica (2017), La abuela (2021), directs this remake of the original story broadcast by TVE in 1982.

Baldo is caught up in a nightmare when he ends up stuck in the tarmac for some incomprehensible reason. His calls for help are met with scepticism and nobody does anything. Both astonished and in despair, Baldo sinks deeper and deeper into the ground without anything or anyone to help him. An updated version of the episode with the same title (broadcast in 1966) directed by Paula Ortiz –From Your Window to Mine (2011), The Bride (2015)–.