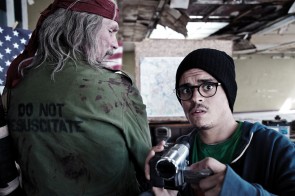 Dennis Mitchell, a Vietnam veteran, has survived everything in his life: war, heroin, jail, the subprime mortgage crisis, and now... zombies. Nothing he can't handle! So he decides to make a video to show those with lesser skills at handling the crisis how to exterminate zombies, whether they be unemployed zombies or banker zombies, who are a little more difficult to kill. Carl Bouteiller, raised in his local cinema on horror, sci-fi, kung-fu and Euro-western flicks, and perhaps precisely because of it, directs this survival handbook for a world besieged by the living dead. Carl says he's working on a feature film about a similar subject.