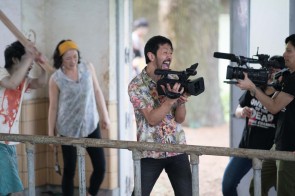 So small yet so magnificent. Funny. Intelligent. Vulgar. Starting with a hair-raising and prodigious single 37-minute shot, cinema within cinema which is in turn within the television and is again in turn as real as only zombies, false blood, gut-clenching and real axes can be. All too accurate was the person who wrote (David Ehrlich at IndieWire) that this is “self-reflexive delight honours and humiliates zombie cinema in equal measure”. Uninhibited, merry, it narrates the filming of a B series movie which is interrupted by a major zombie apocalypse. Or is it perhaps a zombie reality show? It is directed by Shinichiro Ueda, whose films have won 46 international awards and who was already wandering around with a camera at primary school.