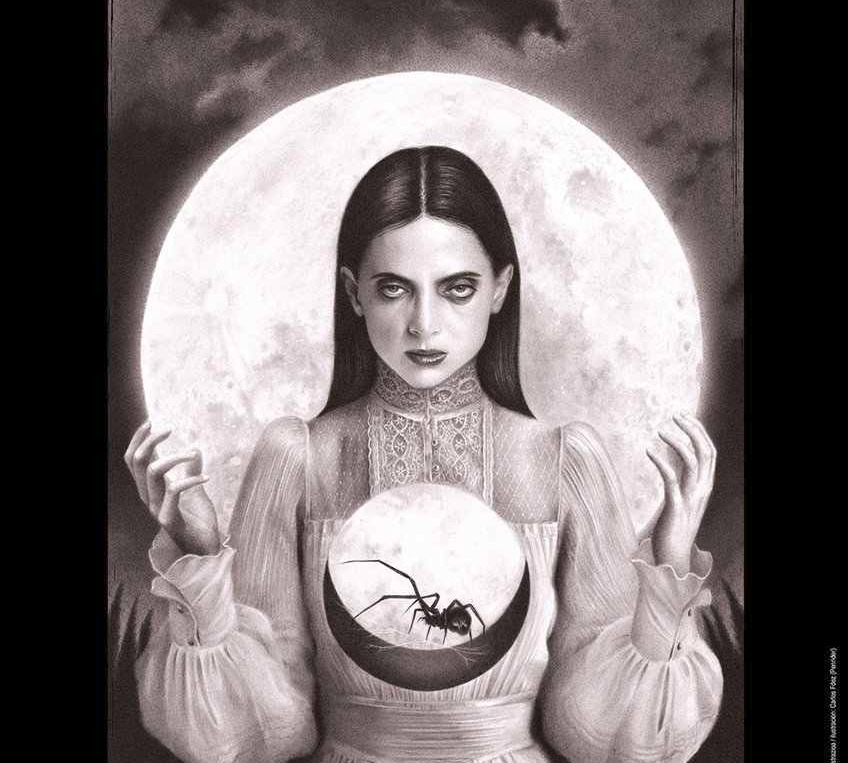 Over the coming months, the actress Macarena Gómez will provide the official image of the 33rd San Sebastian Horror and Fantasy Film Festival, to run from 28 October until 4 November.

A drawing of Macarena by the illustrator Carlos Fdez (Penrider) is the image of the 2022 Festival, which will also lend special prominence to a spider, symbol of the Festival since it began.

Macarena Gómez, who has in recent years become one of the most emblematic actresses of Spain's fantastic world thanks to movies like Platillos volantes (Óscar Aibar, 2013), Witching & Bitching (Álex de la Iglesia, 2013) and Skins (Eduardo Casanova, 2017), previously visited the Festival with films including Dagon (Stuart Gordon, 2001), one of her earliest works, and Shrew's Nest (Esteban Roel and Juanfer Andrés), opening film of the 2014 edition.

The poster is coordinated and designed by Arteuparte Estudio.

In the words of Carlos Fdez: "To produce this work we were looking for a disturbing slant. After several trial runs, we chose a striking front-facing shot in which Macarena's piercing gaze directly focussed on the spectator will lend the illustration its full force".

Since debuting as an actress 20 years ago, Macarena Gómez has participated in more than 80 projects for the cinema, TV and theatre, having landed almost 50 awards and nominations, including the Best Actress Goya nomination for her part in Shrew's Nest.

For 12 seasons she has been among the lead characters of one of Spain's most popular TV series "La que se avecina" (2007-), and she recently starred in the HBO series "30 Coins" (2020-), in which she once again worked under the orders of Álex de la Iglesia following Witching & Bitching. She is currently filming the 2nd season of the series.

Born in Madrid in 1980, with no Fine Arts studies, he learned how to draw by taking illustration and cartoon courses at the Higher School of Professional Drawing in Madrid (ESDIP), but above all by putting countless hours into teaching himself.

Having gained a certain amount of visibility and helped by social media, he has participated in a number of group exhibitions, ending with his first individual show at New York's Haven Gallery.

He always tries to tell a short story with an ending open to different interpretations in an endeavour to engage the spectator.

Specialised in pencil illustration, his work describes mysterious atmospheres using delicate dégradé drawings to depict a tragic vision of the world and surrealist subjects representing dreams, feelings and emotions. He is interested in the loneliness of the misunderstood, loves nature, animals and the outdoors.